While waiting for MM to bring the Chinese home last night I ended up having an online conversation with someone about the East End of London (does that sound as sad as I think it does for a Saturday evening’s activities?).  Before we moved here to Atlanta in March 2000 MM and I had lived in various parts of London.  Oddly working from the most expensive to some of the cheaper (if not a bit dodgy at the time) areas as our incomes increased. We started in West Kensington, then moved to Notting Hill, then Camden, then Whitechapel, ending up ultimately in Spitalfields.

West Kensington was odd to say the least. We moved in to a 3rd floor flat in a house that was under renovation at the time, owned by some dotty Irish woman who was, I suspect,  drinking all the contractors wages away.  It also happened to be across the street from a hostel/halfway house where there were frequent yelling matches, if not fist fights (I was always most concerned about where my little Vauxhall Nova was parked for fear of damage).  Relaxing – not.  However, considering I was still a PhD student and MM was working for zero gaining ‘experience’ on a football magazine, it was not a bad place to live and certainly got me used to the eccentricities and chaos of living in London.

Next came Notting Hill. MM had me sold on location, location, location.  We used to head up to Portobello Road a lot and loved ambling along there at the weekend and bar hopping in the evenings.  The only problem is of course that W11 is one of the most expensive, exclusive postcodes in London so trying to find a flat with the budget of a student and a ‘part time’ worker was nigh on impossible.  Until that is the Ledbury Road property came up.  Ledbury Road – how cool is that – 2 blocks away from Portobello, always in the heart of Notting Hill carnival, close enough to Loftus Road and on one of the most exclusive roads in W11 – so how could there be a flat there we could afford?  Well on arrival we found out.  In a row of amazing town houses there was one that was not so amazing, completely dilapidated in fact.  MM managed to convince me it was still worth a look.  We headed up the creaky stairs through the house that had been converted into 5 flats – one on each floor.  As we entered the 2nd floor flat my heart sunk further.  It was tiny, no central heating, no shower, and a huge damp patch on the bathroom wall.  There was no way I could live there – that was until we entered the ‘living’ room – I was in love with the huge double windows that opened up on to a private balcony.  Yes our own private balcony, on Ledbury Road, in Notting Hill!!  Still, however, unconvinced MM took me to the Ground Floor bar (now only 10 mins walk from the flat), bought me several Moscow Mules and an hour later I agreed we should rent it – I’m such a push over.  We lived there happily for about 4 years enjoying many wild nights out and investigating each new fungus that grew on the carpet.

Ledbury Road as it looks today. 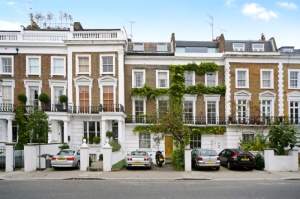 After getting my PhD and starting my first job as a Management Consultant (dead professional now…) I figured 1997 was the time to move on and graduate from student living.  We loved having a market to wander through at the weekend and knew Camden Town would be a place we could get more for our money, so we headed to NW1 and Camden Square.  The basement flat was by no means big but it did have some modern comforts like central heating and a shared garden – imagine that – no mold!  Only problem with Camden Square was it was a pain for transport – I wouldn’t wish the Northern Line every day on my worst enemy…

Working in The City had opened my eyes to the thrill of walking through Bishopsgate, Leadenhall Market, Spitalfields and seeing The Thames every day.  Also our friends were now living in Old Street so we were doing more and more of our partying in Shoreditch, particularly Charlotte Road where there were lots of cool new bars and restaurants – we were so hip.  MM was now happily employed and finances were a little more comfortable so in 1998 we embarked on our search to own our first place.  You would not believe the shoe boxes they tried to pass off as one bedroom flats in our price range back then.  We had given up our lease in Camden and our estate agent in Spitalfields was giving us short term rents until we could find a place to buy.  I think we spent about a year moving from flat to flat without unpacking any boxes – from Whitechapel to Commercial Street – a good thing Brick Lane was so convenient!  Then the flat of our dreams (our dreams in our price range…) came back on the market and we bought our first place together in December 1999 in a fabulous new block of flats on Folgate Street right next to Spitalfields Market – we could live there happily for years!  We moved in, bought furniture then two weeks later MM came home and told me we were moving to Atlanta…

Cantaloupe on Charlotte Road where we spent most of our time and money.

My visit to London Feb 2011 with friends:

Outside our block of flats in Spitalfields. 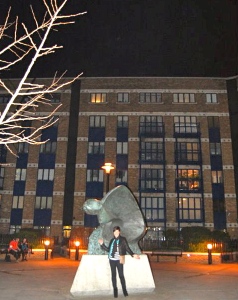 Fancy a curry anyone?

The back of me in Leadenhall Market.