I’m not particularly religious, at least not by the standards set by the Southern States, but Easter is my new favorite holiday.  It encapsulates all the things I love about the other holidays such as family, food, giving thanks and taking time to appreciate the wonders of the world, but it also excludes all the material aspects associated with other holidays that I am beginning to loathe.  I have spent a fabulous weekend with my family just hanging out, running in the sunshine, eating frozen yogurt, roasting a leg of lamb, giggling with the kids and cheering on Bubba Watson in the Masters.

I’ve always enjoyed watching golf.  It’s odd I’ve never played, in fact it’s quite shameful given all those student discounts on the Old Course I could have taken advantage of.  My Dad played when I was younger and I always remember it being on t.v. so somehow I became familiar with both the names and the rules and I gained an appreciation for the skill the top players have.  Living in Georgia provides me with an added incentive to watch the Masters, not to mention my intrigue with the pomp and ceremony, elitism and exclusivity of Augusta.  To be honest it really doesn’t concern me that women are excluded from membership.  I am amused however how it is discussed every year – yes we get it – but don’t watch it if you don’t approve.  For me the Masters signals that Spring has truly arrived and the immaculate fairways, azaleas and edge-of-the-seat shots never cease to impress me.

This year’s tournament has had me hooked and the last round today was thrilling.  Louis Oosthuizen played an amazing second hole with a double eagle but then lost it to Bubba Watson in a playoff.  Bubba is a down to earth guy who is easy to like.  He is exciting to watch – left handed and has never had a golf lesson in his life – apparently.  Still he can hit that tiny ball further than many players in the game and he held his nerve today to win.  Plus he used to play for the University of Georgia so another reason to root for him.  Of course he melted all our hearts when his final putt won him the green jacket and he sobbed his way off the green.  Well done Bubba. 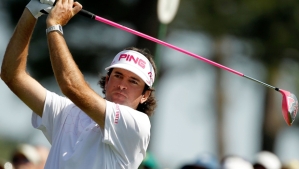 1 thought on “Bubba’s nerves of steel.”