It is with some hesitation that I write this post.  Firstly and mainly because I am no authority on running having only dabbled in the activity since my early 20s, and only more recently considered it as my main activity when it comes to staying fit and keeping the additional pounds at bay.  Having said that when I feel I have news and information to share that may benefit others I think it only right to do so.

Just over a year ago I completed my first half marathon, but sadly after all my training, I was much slower than anticipated due to searing pain in my left knee.  It turns out I was suffering from a common runner’s condition where the IT band up the outer side of the thigh is under severe stress and tightens, developing knots of scar tissue over time.  Anyway long story short it stopped me running for some time and taught me a valuable lesson about the need to stretch and use a foam roller for deep massages.  This injury could have arisen from wearing incorrect running shoes, overpronation, or running on the same side of the camber for too long, amongst other things.  I had had my running style analyzed on a couple of occasions resulting, unfortunately, in conflicting diagnoses – one suggested I over-pronate and the other suggested I was relatively neutral.

Since my running had picked up a gear or two I had been wearing Asics Kayanos – a well supported shoe with good stability designed for moderate overpronators.  I’d never had any problems till my IT band, so somewhat dismissed the idea it might be my shoes.  But once I started running again I began to get a really sore instep.  After a visit to a podiatrist she suggested that the built up instep of the Kayano, designed to help support, was actually bruising my instep as, in her opinion, I was definitely more neutral with collapsing arches.  Geez – now I’d had a physio tell me I had no butt and my glutes don’t fire, not to mention what they said about my posture, and now I have a podiatrist telling me my arches are collapsing – it’s a wonder I can walk at all never mind run.

So in an attempt to continue running I decided to try a new shoe.  I did some research online and decided not to ask a running store this time as I thought they may be bias towards certain brands.  The clear winner in all the online reviews was the New Balance 890.  Now I’m a brand girl and as far as I was concerned New Balance are worn by nerdy geeks with jeans.  I would never have selected New Balance, ever.  On closer review, however, I found myself warming to the idea – then when I saw the awesome, garish rainbow colorway I was smitten. 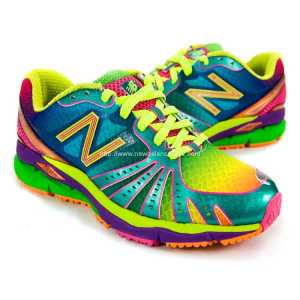 I’ve been running in them now for about 3 months and I have had no pain whatsoever, touch wood.  I did once try and revert to my Kayanos just to test the theory out, and yes it may have been psychosomatic but I had to pull up with my knee once again.  The 890s are incredibly lightweight and yet feel supportive and provide great cushioning, and New Balance have just released the 890 v2 which is apparently even lighter.  All I can say is that I’m hooked and can’t wait to try them.  At least I’ve come to terms at last with being a nerdy geek, though I have sworn to MM I’ll never wear them with jeans.

Here’s a great write up I found on runcute.com while researching the new 890 v2 – I LOVE the yellow and purple colorway. 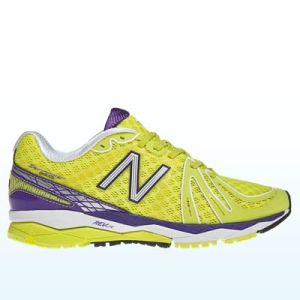 See you out there pounding those pavements!