Some days you just know you got it right.  Even if others don’t agree it doesn’t matter because you know you nailed it.  Whether it’s the way a scarf picks out the colors, the new shoes you’re wearing, or even just the right piece of underwear – you feel damn hot when you walk out of the door and there ain’t no shame in that.

I’m having one of those days today.  It’s an outfit I threw together last minute as I was initially envisioning brown leggings but then discovered they were in still to be washed.  Thank goodness for that – what a dowdy outfit it could have become!  Instead I was inspired by the blush trim on my H&M scarf and went for my favorite blush Express Zelda jeans.  The sweater dress is the incredible bargain from H&M that I got at the weekend – just $25 and SO soft.  I adore the tulip shape and the asymmetrical hem.  Now the boots maybe what make the outfit – at least I feel like I’m in heaven wearing them – and it’s their first outing!  The amazing Acne Pistols.  Now I know what all the fuss is about.  They are a ridiculous indulgence but they are freakin’ cool. 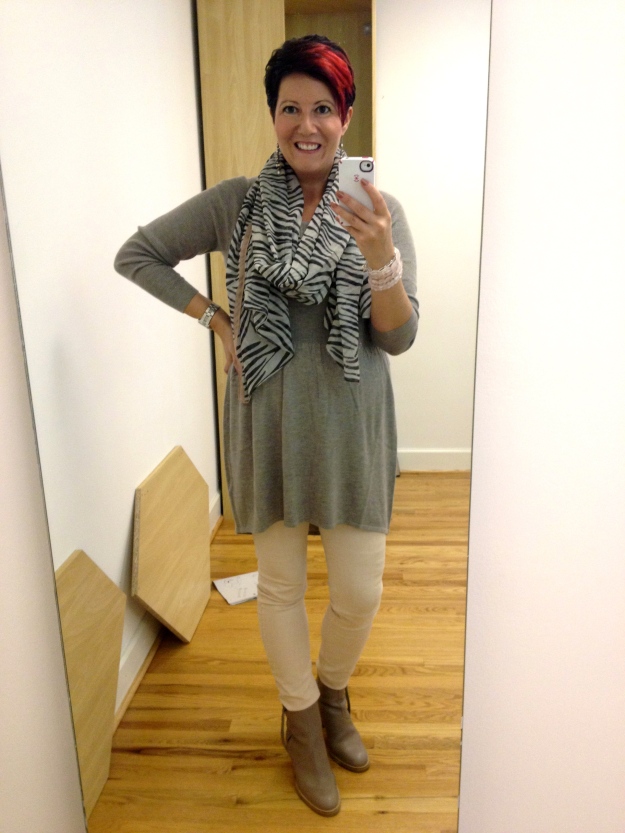 So now for the explanation of the title of this post for my non-European readers.  In Europe we have a fascinating phenomenon known as the Eurovision song contest.  Held every May, qualified European countries enter a ‘singing’ competition in order to be ridiculed by the rest of Europe.  Don’t get me wrong, there have been some amazing success stories – ABBA being the most prolific (and they’re Swedish, continuing to prove the point I am trying to make).  However the vast majority of us watch it to see which country has the most eccentric entry – and believe me there have been many as seen here.  Anyway in the 2 hour long voting process that takes place afterward where each country awards points, based sometimes on political agendas, the highest awarded is 12.  Point distribution is read in English and French – hence “Sweden, douze points!” from this little ole judge here:)  Phew…was it worth it?  Anyway douze points goes to the Swedes because they really are quite clever – not only do they have a fantastic standard of living, a great education system and fabulous childcare facilities –

1. Where would I be without H&M this Fall?

2. My IKEA Pax closet is the best invention ever and is taking shape in my closet as you can see in today’s photo – beyond thrilled I tell you.

3. Acne – well what more can I say about my beautiful boots?

4. Our great friends Simon and Karin live in Stockholm.