My spin instructor had me tearing up this morning.  Not because of the pain she inflicts on us each week (lovely lady but turns psycho on a spin bike), but it was all down to her little motivational speech half way through the class.  My endorphins were flowing but she also touched a nerve.

She told us about the following Dove ‘Real Beauty’ campaign.  A forensic artist sketched a handful of women based on their descriptions of themselves, and then again based on the description of others.  The results are startling.  In each pair the sketches are completely different to each other. Those created when the women described themselves are far less flattering than those created with the help of others.

Why are we so hard on ourselves?  I know many people think bloggers like myself must be full of confidence and that we must be incredibly vain to post photos of ourselves all over the internet every day.  But you know what – sometimes the opposite is true.  We all have our own hang ups and stuff hidden under the hood/bonnet that we don’t always share with others.  Maybe if we listened to, and accepted, other people’s complements more often we may see ourselves in a truer light.  As Jennifer told us this morning we are all ‘beautiful, strong women’.  Remember that the next time you criticize yourself in front of the mirror.  We are beautiful no matter what we say.

Watching this video even brings me to tears – but I cry when I hear bagpipes and brass bands too:)

I’m just starting to feel human again.  Those bus stop ladies are quite a riot when you get them in a bar around a bottle (or several) of white wine.  Thursday was tough going but it was worth it.  I love these ladies!

The leggings I wore are new and a real steal from Nordstrom.  It is great being able to purchase TopShop items here now thanks to their partnership with Nordstrom.  They were an impulse purchase after seeing them on Martha’s post the other week. 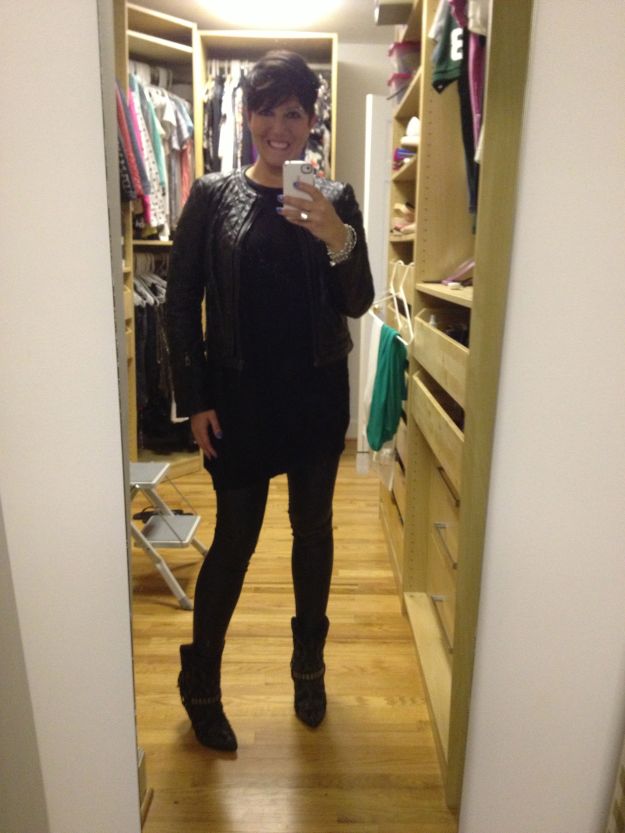 There is nothing like the thought of wearing a bikini for motivating me to hit the gym.  So yesterday I went to spin – it was amazing – a great endorphin rush in a lovely quiet class!  I hope it is the same this morning – yes I am motivated:)

After spin I was running around like a crazy woman doing last minute errands for the trip – wine was bought, packing was done and finally the Brazillian was accomplished – TMI I know, but I find they are essential when you’re in a swimsuit 9 months of the year.  Plus it’s much more comfortable on the spin bike:) If you are in Atlanta go see Larissa at Brazilian’s by Andreia at the Buckhead location – she is amazing – and most importantly – gentle!

I literally did. not. stop. yesterday.  My Fridays can become one of either two things – a leisurely day of pampering and indulgence, or frantically driving from one Atlanta location to another trying to check off a list of ‘things to do’.  It’s normally the latter and yesterday was no exception.  It started with a spin class.  Now I am no regular but I love the satisfaction of having been – the hour on the bike is pure hell.  One of my neighbors teaches the class and she is lovely, but turns into  a b*tch on wheels in class – all for the benefit of the participants obviously.  Shopping was then followed by a quick lunch with MM – I had earned it and I still had a calorie deficit after that spin class!  A hairdresser’s appointment for Poppy was then followed by Hugh’s last Christmas pageant!

His last as he is currently at a church daycare and next year once in public school, with separation of church and state and all that, there will be no nativity.  The pre-K class (last year of daycare) always get to do the nativity play so I was very excited to see what role Hugh had.  But NO!  Hold on there…for the first year ever I arrived to find that the ‘after school’ group were doing the nativity!  WHAT??  Our chance of being a Shepherd, a Wise Man or even Joseph snatched from us!!  Now after the events of the day in CT. it seemed trivial to say the least, but I was mad as hell!  Most of the ‘after school’ group had attended pre-K so had already had the privilege of performing the nativity – so why oh why deprive the pre-K class from their chance of performing it?  I’m so sad:(  This now means Hugh won’t ever be in a nativity.  Now he is definitely not bothered – but his Mum is!  I might even join a Church so we can be in theirs next year.  Be assured I made my feelings known to the daycare Director.

At least we got to hear about Harold and his Angels: 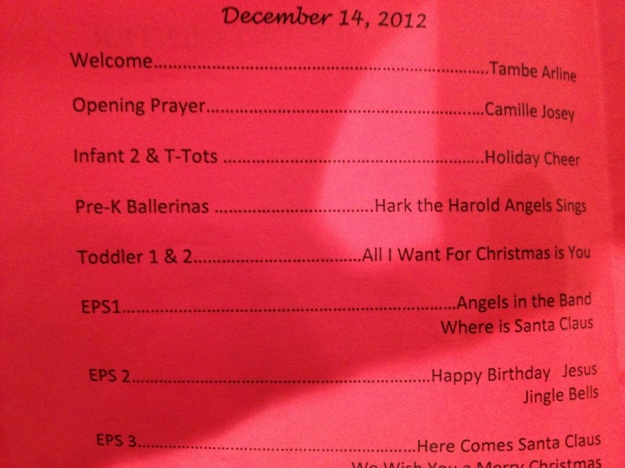 For the pageant I did a quick change into my awesome Target dress – quickly becoming one of my best purchases of the year – I always get complements and no one can believe it is Target.  The jacket is from Zara and has lovely gold and cream flecks in it – perfect for the festive season – size up though – it’s tailored for waifs.  The leggings are H&M and the boots are my loyal Rag & Bone Newburys. (Apologies for photo quality – I told you I was in a rush!).